I decided long ago that while my body parts still work, I will use them as best I can until I can't. My 70th birthday is a biggie, and so I checked two more adventures off my bucket list: Ziplining and kayaking. Thank God I have a supportive and loving husband, because he reluctantly joined me on the kayaking portion of my program. He is not a strong swimmer and is not particularly comfortable in the water. Well, after this adventure, maybe the worst has happened and he will be more confident going forward. Time will tell. This is to say, that Larry is the best husband in the whole world.

We left on Sunday, June 30th, and headed northwest for three and a half hours to Charlemont, Massachusetts: home of Zoar Outdoor. An ad for this company came up on my Facebook feed. I cannot say enough about how great the staff was and the adventures we experienced. We never once felt unsafe ziplining. Kayaking was much more of a challenge. The experience I chose is call the "Zip and Dip".

We checked into Hawk Mountain Lodge (the blue building), and discovered we were the only ones registered to stay there. The Lodge is a renovated 1800's farmhouse with only a DVD hooked to the television and Sirius radio from my phone to listen to. Rubin was our Lodge Manager, and he had his own apartment attached to the house. Other than meeting at checkin, where we merely took our key from a marked box outside, we never saw Rubin again. Oh, I did confirm that first night that we were the only ones in the house and asked if I could lock the outside doors. I learned the following day that nobody locks their doors. I got away from that practice decades ago.

Our suite consisted of two bedrooms and a very large bathroom. We used the adjoining bedroom with two twin beds as our dressing room. We loved having lots of space. There was no air conditioning, so our windows were left open and we were fairly comfortable. After unpacking, we drove to Shelburne Falls to explore because our friend, Nancy, told us how beautiful it was there. We found the falls and the potholes, along with the absolutely gorgeous "Bridge of Flowers". We roamed around taking pictures, found a "packie" and bought a bottle of Irish Whiskey for nightcaps, and went to the West End Pub for dinner. The lodge had no glasses for drinking, so we bought a couple of rock glasses from the Pub and used those over the weekend. Our view of the Deerfield River from the Pub and of the flower bridge was just magical. 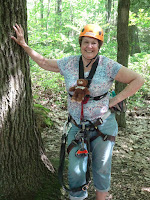 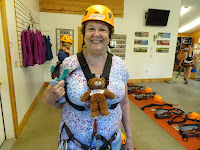 We got a reasonable night's sleep before venturing a short walk down the street to the Cold River Cafe for breakfast. I tried making coffee at the Lodge, but there were no supplies beyond grounds, a filter and paper cups, and no dishes or spoons for our oatmeal. We both had a hearty breakfast, then headed over to register for ziplining in the green building.

The staff were all twenty-somethings; very friendly, perky and professional. Three women were our guides: Amanda, Emily and Ashley. We think Ashley was a trainee. Kevin was the manager, and was also very nice. He checked in on us throughout the day. Of course, I told everyone it was my birthday (I also mentioned it when I registered for this trip), and all day staff members wished me Happy Birthday whether we met them or not! I loved that. I brought Logie Bear along for his newest adventure. You can read about that on logiebearadventures.com. 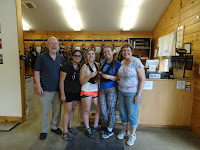 We got harnessed up and hiked a short way to the practice zip ingwhere we were given lessons that we practiced before hopping in an open jeep and driven to the top of the eleven-zip course on the mountain. The views up there were spectacular. Each zip line was a different length and speed. We rappelled down from a platform three times as well, and we had so much fun!!! It took us a few tries to zip; braking with our left hand that was gloved with a brake pad on it, and landing on a step stool at the platform where Emily unhooked our harnesses. We were never unhooked from the trees, the platforms or the zips. It felt very safe. Both Larry and I had a ball. We also met a nice family: Pamela, a fifty-one-year-old businesswoman, and her two adult children: Kailey and Sam. We all had so much fun together, and they made me feel good telling me there is no way I looked seventy. I can't get enough of hearing that I must admit.

Kevin provided us with a lunch in the large Pavillion of turkey and ham on rolls with lettuce and tomato, macaroni salad, hummus, chips, salsa and cookies. We ate our fill, and got ready for the next adventure: kayaking. We met Kim, another early-fifty businesswoman, who was staying at Mount Snow with her motorbike-competing husband and two sons. She doesn't do that, so she came by herself with us. Ross was our twenty-something guide, who got us our PFD flotation vests, helmets and paddles. Jim drove us all with sit on top kayaks in tow and we were off to the Deerfield River. The hydro-dam raises the water level every afternoon, so that is when kayaking is best. There are lots of very large boulders in the river, as well as tree trunks, islands, and the bottom is covered with various size rocks and boulders.

The river was running at what looked like a good clip to us with category 1-2 whitewater in more places than we anticipated. Some of the waves were a real challenge. I gwamped (a term they use for ungracefully making it over a big rock without tipping over the kayak) over several boulders I didn't see coming, and said a lot of bad words on my trip. Kayaking this river was as much challenge as I needed or will ever want, so I felt really good about my future kayaking in my own boat on the Sakonnet River at home.

We had one very scary moment when Larry hit a similar rock after our snack break and his kayak flipped over. The kayaks had straps that held our knees down, and his were still attached to the boat. I got through a rapid and turned around to see his kayak flipped and his arms flailing. I panicked and began yelling to Ross who was quickly paddling to his rescue, "Save him! Save him! He can't swim!" I was beside myself with worry. I just kept being carried farther and farther away by the river's current no matter how hard I tried to paddle towards my (what I thought) drowning husband. Kim was more experienced than I and could paddle harder, so she was between us. She picked up his floating paddle and after many tries getting back onto his kayak, my exhausted husband and our guide caught up to Kim to retrieve his paddle and we continued down river. Very shortly after Larry realized his greatest fear in almost drowning, he rode up on another big boulder and got stuck there. I turned around again to check on him and saw him sitting pretty atop this big rock. "Are you kidding me right now?" I yelled to God. Ross got to him and lifted one end of his kayak and swung him off the boulder to free Larry once more.

We had a few more rapids to get through before Ross pulled us one by one to shore and out of the river. Once we were fully out, I hugged my husband so hard, holding back tears and trying not to gush out of fear too much. I didn't want to embarrass him, but I was so grateful he was okay. On our way across the street to the Pavillion to see the photos Ross took, two pickup trucks came to a screaching halt close to us on the road. The lead truck's driver hopped out yelling at the truck behind him. Apparently, the second truck swerved around the front truck, cutting him off. The front truck was an emergency person and was rushing to the scene of a person who had just drowned on the river. I backed up thinking there was going to be a fist fight and maybe a gun drawn. It was that intense. But, the second truck just screached around the guy yelling and hauled ass away as fast as he could.

We said goodbye to all our new friends and the staff, showered and went to a lovely dinner at The Blue Rock restaurant. Cosmos were the drink of my weekend, and we enjoyed beautiful scenery the entire time. We walked to an ice cream/fudge store and I got a sunday for dessert. We enjoyed nightcaps of whiskey again, and toasted to a great adventure where we both survived to tell the tale. Larry is bruised and stiff but alive. Thank God! I asked him if he'd kayak with me at home, and he didn't say no. The worst already happened to him, and the Sakonnet kayaking will be a "piece of cake" compared to our river experience. Onward and upward.
Posted by Kathy Crowley-Gardner at 8:03 AM