My sister, Karen, signed up for this walk in honor of her sister-in-law, Diana. Diana is also a friend of mine from high school and our neighborhood of Newton Upper Falls, MA. Team Diana was created for Hope Walks 2013. Newton Wellesley Hospital has been our family hospital for generations: my grandmother, mother, me and my son were all born there. Many of life's major medical events landed there, and I was happy to help out their Vernon Cancer Center. Dr. Jim Vernon began the center, and lost his wife to cancer a year later. He was on-hand to welcome walkers and received a standing ovation. My sister, Karen, told me he did all her cancer surgeries, and she just loves him.

So may people I did not expect showed up to walk in Team Diana. Her children and many friends came. Her mother, who I never met, was there with her husband. "Hi, I'm Kathy", I said to him. "I'm Clay. So what?" I loved him right away.  Friends I haven't seen in years were there, and it was like a mini-"old home week". What a wonderful experience.

The walk totalled 3.5 miles and was very well organized. Whole Foods provided bananas and apples free to walkers. I got inroduced to "Hint" water"a lightly flavored water I liked, but my sister, Margie, didn't. She likes more flavor.  There were tables with lots of information and an inflatable colon with examples of benign and malignant polyps. It was actually interesting. They fed us lunch after the walk and provided water along the way. At the turn-around point, my sister, Jeanne (also a cancer survivor), spotted a single Port-o-John at the end of a driveway in front of a house on Commonwealth Ave. We decided it was a private potty, but we used it anyway. Soon, walkers lined up behind us. We felt badly about this, but the owner moved his car and didn't tell us not to use it. Thank you, whoever you are!

My hips stiffened up quite a bit and I had sharp pain on the ball of my left foot. I wore Moleskin, but it didn't help. I sucked it up, reminding myself of everything Diana and my sisters, mother and grandmother and many others went through with their cancer treatments, and felt grateful for my good health. So what if I stiffened up and limped a little. I can get over that! "Shut up and keep up," I told myself. I was happy when we got to the lunch line and to sit for a while. It was a beautiful day, and I was grateful for that too. 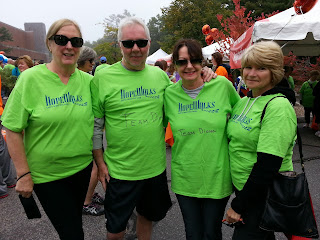 Seeing old friends and reconnecting with family, especially while helping a good cause, is a wonderful feeling. Thank you to everyone who donated on my behalf. You helped me raise $300! Our Team raised $5,425.00. Thank you so very much. I love you all.

A hot shower and a bit of stretching, and my legs were good as new. I decided I need new shoes though. :o) 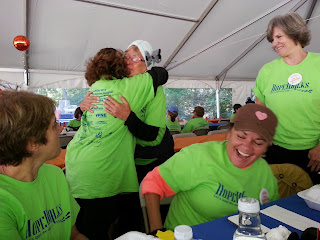 Posted by Kathy Crowley-Gardner at 10:01 AM No comments: 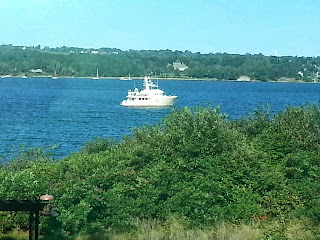 One can never stop having adventures. That's my motto at least. Last Monday night, a lovely Nordhavn trawler named Shear Madness graced the waters outside our Tiverton home. We noticed her approach and then she moored in full view of our windows. The next morning, she was still there.We spied on her with binoculars, and saw a young man on deck before he disappeared below decks. Larry looked up the name online and we found an entire web site all about the owners, Kathy Clark and Bradley Rosenberg. They even have a blog!

I emailed them to let them know which house we were in, and wished them well on their voyages. Kathy and Bradley are sailing the world as a retirement lifestyle. How romantic! Kathy emailed me back and invited us to come say "Hi". I got very excited, and asked Larry if he wanted to go. He was open to the idea, but he is not comfortable in the water, so I saw trepidation on his face as well. I thought it would be a great idea to call our friends and neighbors to the north, Mike and Nancy. They are sailors and have lived aboard a sailboat for a time, sailing as crew between Miami and Bermuda. They both wanted to go too, so I tried to make a date with our potential new friends hanging out on the Sakonnet.

Kathy called me back when I told her we all wanted to visit and proposed a 7pm time Tuesday night. She suggested earlier might be better, so we didn't have to navigate rowing in currents in the dark. We planned to row a skiff out from our shore. I suggested immediately since I knew were were all home, so I called Nancy and asked if they could go right away. Mike was out doing errands, and Larry wasn't really keen on going, so Nancy and I went.

I met her on the beach in front of her house. She had life jackets, and together we pulled the little boat onto a trailer and launched it. She insisted on rowing out, so I was the navigator. We laughed at our folly all the way out to Shear Madness. It was pretty far! But Nancy did very well, and is one strong woman: the current was strong and winds caused waves we had to plow through. We just kept laughing. 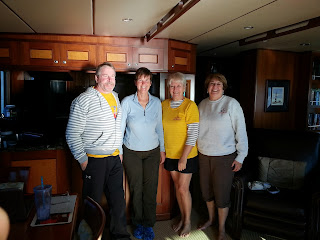 Once we reached the boat, Kathy, Bradley and their hand, Tyler, met us. They held our boat while we climbed aboard, rinsed our feet after we removed our water shoes, and then entered their luxurious floating living room. What a boat! It was like something our of a movie. It had three decks, four bedrooms and five bathrooms. It carried 4,600 gallons of diesel fuel, travelling 1 mile a gallon, and had sixteen large batteries. They made their own fresh water from salt and had several large holding tanks for fresh and grey water. There was a washer and dryer aboard, a full-size galley with large refrigerator, and several freezers.

The living quarters were carpeted, and the comfortable furniture was quality: a full dining room table and chairs to seat at least eight. Leather furniture in the living room, and in the Pilot House was another watch berth. This bed is not for napping while on watch, though - that is absolutely forbidden! It's a place for a second person who is not on watch to sleep if they need to be close at hand, or to take a nap while they are at anchor (this phrasing was sent to me by Kathy as a correction to my original post. Thanks, Kathy).

Their navigation system was very sophisticated, and the controls looked like a gameboy. Bradley showed us how it all worked, and we were just wowed. They also had comfortable furniture on the upper deck and could navigate from that vantage point while basking in the open under a permanent canopy shade. There was a large motor boat for venturing ashore, two kayaks and an inflatable boogie board. They both were scuba divers, and must be in their fifties. Very active, and very nice people.

We enjoyed a glass of Prosecco while we visited for another hour before Nancy and I headed back to shore. Before leaving, though, Kathy announced that anybody who rowed to see them got a t-shirt. Really?  Yes, they had their own t-shirts made, and we were so happy we took a shot to meet these adventurers who welcomed us into their floating home and their lives. I've never done anything like this before, but was very happy I siezed the moment, and that my friend was willing to share it with me. Life is very good. 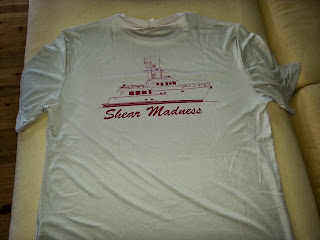 Posted by Kathy Crowley-Gardner at 11:33 AM 2 comments: