I love living in a small town. There is so much to enjoy within a ten-mile radius. Here in RI, we live near many farms. Everywhere you look, are little stands on the curb outside various homes selling produce grown out back. Paying is by the "honor system". Just leave the money in the jar or box provided. This is also how I buy my annual herb plants and fresh eggs. It saddens me to think that "honor" diminishes with population density. How long do you think that cash would remain in that jar or box in Providence or Boston?

I also joined a farm share program this year. I've never done this before, and many times I don't get around to eating all my vegetables in a week. So I bought a half-share to see how it goes. The share is paid up front. Each week, Kelli sends shareholders an email updating us on activities at the farm, located about three miles from my house. Included in the email is the order form with pricing. I simply check what I want in the online form, and the day/location I want to pick up my vegetables/eggs. Then I show up to empty the blue bin labelled with my last name.

I noticed that I have begun to forget to pick up my vegetables. The first time it happened, I received a very polite email from Kelli reminding me that vegetables don't preserve well unrefrigerated overnight and that she and her husband are very tolerant of late pickups. I thought this wording was very kind and thanked her for the reminder. I showed up at midnight with a flashlight to empty my bin. This week, I forgot again. I received no reminder, and I arrived a day late. I was pleased to see that actually my vegetables, while still in the only bin left outside and sitting in the sun, were still fairly cool. I got them home right away and into the fridge. I don't like refrigerating tomatoes, so they stay on the kitchen counter.

I also went to a Cultural Survival Bazaar with my friend, Debi, last weekend. It was held two miles from our house in the "Four Corners" area of town on the lawn. We browsed around for an hour or so, bought a few nice things, and ate a little lunch while listening to a Nipmuc Indian named Hawk Henries play the woodland flute. It was a lovely afternoon.

My friend down the road is an artist who has begun to successfully market herself and exhibit her works around town. There are many art galleries in Tiverton. Last weekend, my husband, Larry, and I attended a gallery opening where Nancy Shand was exhibiting. We have only attended one other opening in Framingham, MA for our friend Marie Craig. I have known Marie for many years, and watched her grow into an artist; fighting all the self-doubt that comes with a change-of-career journey. When she opened her first studio, was the first time I attended anything like that. Now, she and an artist friend started and maintain a gallery in Framingham, MA, Fountain Street Studios. I seem to be comfortable attending openings of a friend when I know her whole family with also be there. I am otherwise intimidated by art galleries. I don't go to them in general. 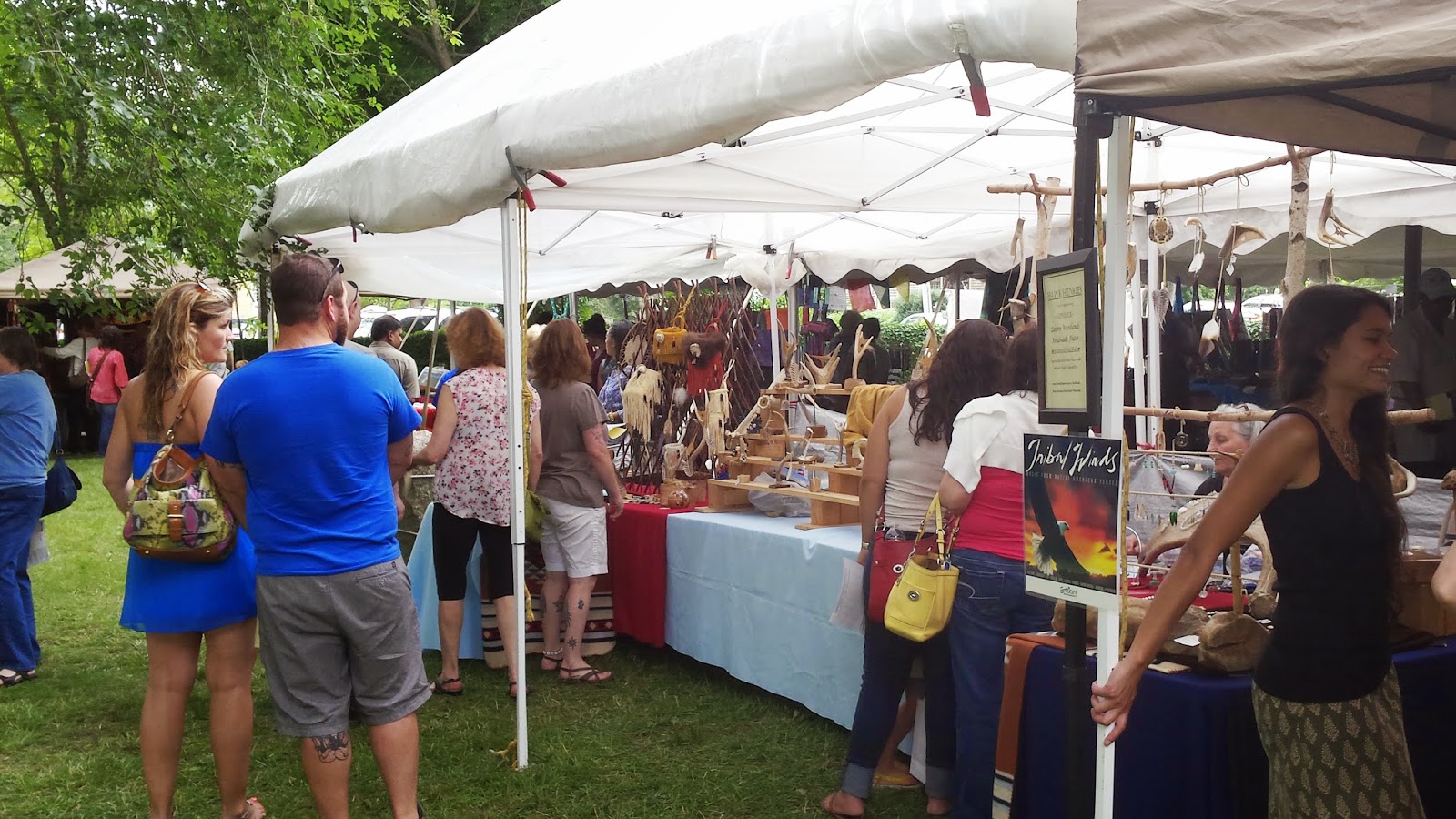 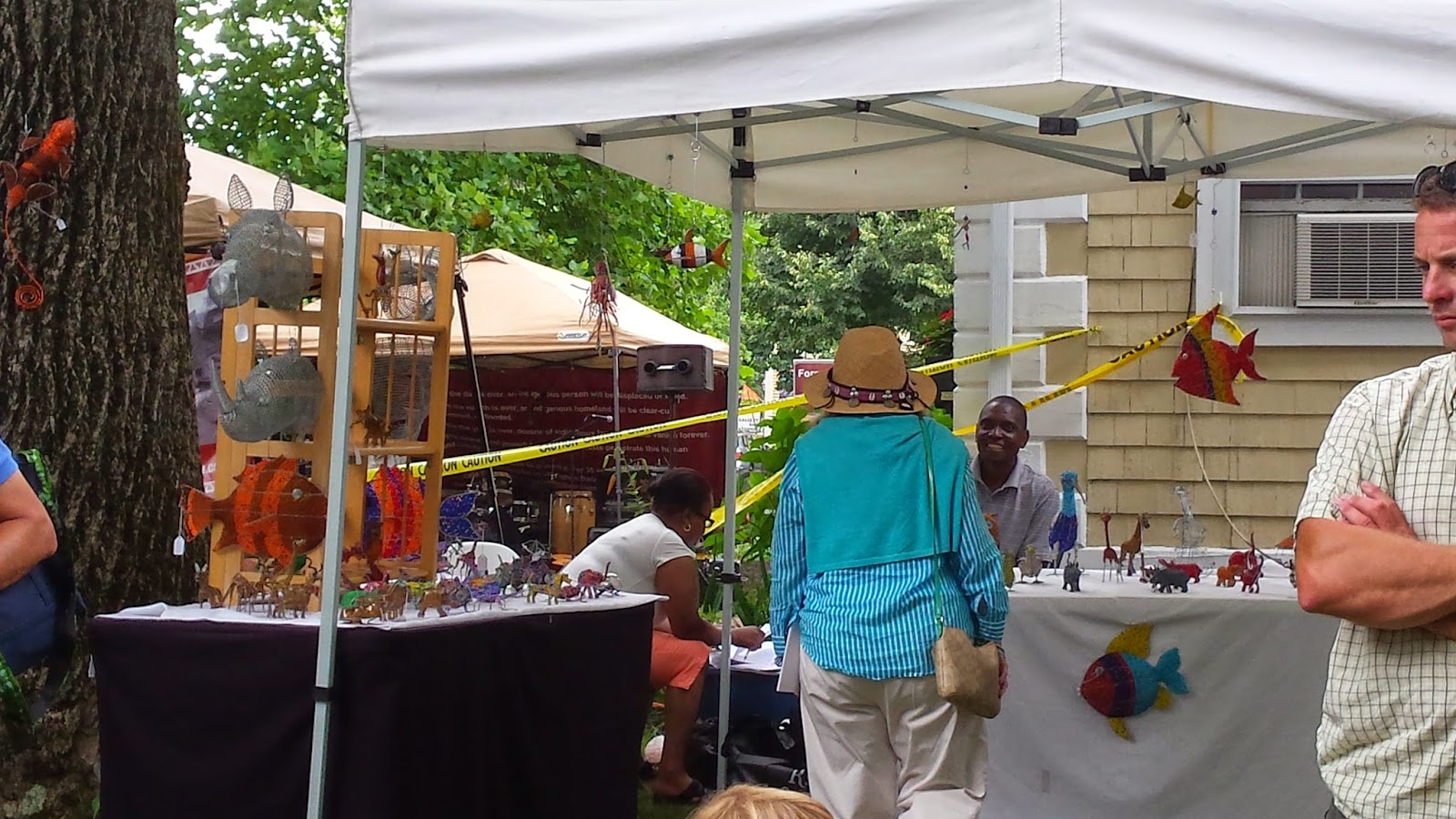 I confessed this fear to Nancy, and she couldn't believe it! She dragged me to a gallery in Westport, MA run by Dedee Shadduck. Nancy told me when it opened that I should make a point of going. She described the space as new and that it held beautiful light. Nancy is a big fan of light, as am I. I told her I would, but never did. We attend an aerobic exercise class together, so after class one morning, we went to the Shadduck gallery. She was right. It is beautiful. Nancy introduced me to Dedee, who was so warm and welcoming. It was not intimidating at all! These galleries not only sell paintings and sculptures, but jewelry. At Dedee's gallery, I found the exact kind of red beads I wanted to accessorize my Christmas concert outfit. I sing with the Greater Tiverton Community Chorus, as does Nancy.

So when Nancy invited us to attend the Van Nessem Gallery for their opening and her exhibit, I didn't hesitate. Her husband, granddaughter and good friend also came, and we had a lovely time. We also went to an impromptu dinner afterwards. It turned out to be a wonderful evening.

Nancy's husband is very active in the Tiverton Land Trust. Larry and I are attending the "Land and Sea Gala" fundraiser for it tonight. This is our first-ever gala, and all the locals will be there. "Bring a card", Nancy instructed me when she ran into me at the beauty salon while I was getting a "cut and a color". Apparently, along with locally produced and prepared food; beer, wine and cocktails, there will be an auction. I've been told to "shop 'til I drop".

We just got back from the gala. It was really fun! We walked to the event and arrived right on time. We felt a little awkward. We didn't know anybody but our friend, Mike, and he was working. So we got a gin drink and browsed the auction items. There were silent auction items where you just wrote your name and bid on a clipboard, and the live auction where I bid on this Meadow Lark painting by Brenda Wrigley-Scott . The moment I saw it, I knew I had to have it. I also fished for an octopus (plastic, of course) in a tank and won a nice bottle of red wine, made locally. I also got a gift certificate for a young childrens' store, so I gave that away.

Larry and I sat alone for a long time because we arrived early and had to sit. As the huge tent of tables-for-five filled up, it appeared we were the only couple sitting alone. I didn't like this at all, so I went over to the table of all our neighbors and asked if we could join them. We did, and the celebrity of the evening was with them: Larry's hero (my words, not his), Norm Abrams from PBS' This Old House series and his wife, Elise. Norm has been with the show thirty-five years, and Larry got to tell him he'd been watching for thirty-four. They were very nice. He put an item up for auction, and it was the big seller of the evening: lunch with the crew and a day at a shooting of the series. They are working on the youngest house yet in Lexington, MA. We also got to tell him we lived a couple houses down from the workshop. It was really cool.

Living in this small town is starting to feel like the TV show, "Cheers". When I go to the deli counter at Tom's Market, Don (because now I know his name) always says, "Hello", to me. We chat while he gets my order and I love that. Tiverton is not quite Mayberry, RFD, but it sure feels like it sometimes.
Posted by Kathy Crowley-Gardner at 7:48 PM 1 comment:

The Power of Canine Companionship


Larry and I watched Futurama on TV last night. I've never seen it before, and will never watch it again. (I never watched Southpark again after the episode where Jesus and Santa Claus get into a fist fight either.) The Futurama episode broke my heart. I got angry and went upstairs to read. I just couldn't stand watching television one more minute. But, I couldn't get the episode out of my mind and just wanted to cry. I felt heartbroken. I reacted, and still am reacting, so extremely to it. I just don't understand why.

The main charcter accidentally fell into a cryogenic machine while delivering a pizza to the site. He was thawed ten thousand years later. Meanwhile, he had befriended a scruffy, street dog he named Seymour. He worked at a pizza shop and fed Seymour pizza. Their favorite song was, "Walking on Sunshine".

After being thawed, Philip J. Fry is now friends with a robot. They go to a history museum where Fry finds out the pizza shop he worked at has become an exhibit, complete with his now fossilized dog exhibited in a glass case. He is appalled to see his pet has become an exhibit, and steals it from the museum. He brings it to a scientist friend to extract DNA, so his pet can be cloned. (I never watched the show and can't be bothered providing all the details, so they may be inaccurate.) The robot becomes jealous and throws the fossilized dog into a vat of lava thus infuriating Fry.


Long story short, eventually all is forgiven and Fry gets the dog back to be cloned. He finds out the dog lived to be fifteen years old. Upon finding this out, he realizes he only had the dog at three years old. Therefore, the dog must have live a whole other life, and concomitantly sung to a whole new song with another owner. So, he cancelled the cloning process, decided the dog had a happy life without him, kissed it and said goodbye.

New scene, we see the dog searching all over creation for Fry, and finds him in the cryogenic tube, but Fry's parents don't notice, and put a leash on the dog and pull him away. The dog spends the rest of his life sitting and waiting in front of the pizza shop for Fry to return until the dog lays down and goes to sleep forever in old age. The tune we hear through the passing years as we watch the dog age and die waiting for his beloved master to return is, "I Will Wait For You". Are you kidding me?

Then today on Facebook, I see a video about a pair of dogs, one was run over and died, while the other prods it relentlessly trying to wake it up. I couldn't even watch the whole thing, let alone listen to the commentary. I am crying inside with the sad emotion of the devotion and loyalty and persistence of dogs. I wish all humans behaved the same way. Maybe that's why I cry. I don't know. But, I need to snap out of it for sure!


Posted by Kathy Crowley-Gardner at 8:57 AM No comments: