On the last day of our wonderful vacation on North Myrtle Beach, South Carolina, my sister-in-law and I took our last hour-long beach walk after eating a 6:30 a.m. breakfast with our husbands and sending them off to their last day of golf in the heat and high humidity. We love these walks. With Hurricane Leslie far out in the Atlantic Ocean, dark clouds hung over the horizon keeping us cool, and the early morning temperature today was cooler than it has been over the last three days. We were more tired this morning than usual, but as we walked, watching the little terns and sandpipers pecking their long bills into the sand hunting for snails and who knows what else while playing tag with the waves (they seem to hate to get their little feet wet), we picked up the pace and chatted. The roaring waves were as loud today as they have been, so I had trouble hearing her soft voice next to me. I always feel a little badly having to say a little too often, "What?"

About half-way down on the first leg of our walk we saw a surf-caster with his rod bent a little too far. "He has something," I said. "We have to stay and watch what he caught," Karan echoed my thoughts. "The only thing I've seen anybody catch, " I said, "is a little brim-size fish about the side of a sunfish." We stopped with several men on the beach, some who seemed to be friends or comrades of the fisherman and watched his technique. He held his rod straight up as the tip bent far forward and walked backwards on the beach. He kept walking and we side-stepped as he went to give him plenty of room and to get out of the way of his taught line. He walked pretty far back, slowly and steadily, giving the line plenty of rest in between not to rush whatever was on his hook, and allow it to get away or to break the line. Then he reeled the line in quickly walking toward the shore again before stopping and repeating his walk backwards.

An older woman with her plastic rain hood tied around her chin and her head down marched along the beach straight towards the taught fishing line. It was clear to all of us that she didn't even see the line, the fisherman or the rest of us all standing around. One of the men yelled, "Ma'am! Watch out, Ma'am!" But she didn't even react to his voice, and the poor fisherman had to lift up his taught rod to avoid cutting into her neck or forehead. We thought he had lost the fish, but sure enough, the line was still taught and he still had something on it. I wondered if that woman went though life that way: walking towards who knows what with her head down instead of looking where she was going or at what was around her: one of the walking unconscious, as I like to refer to them.

We kept looking at the line and tried to follow its trajectory into the surf looking for a splash or some sign of what he had caught. "I hope it's not a clump of seaweed working against the surf," I said. I kept looking back and forth, and soon, all the men rushed towards the surf's edge. There was something flapping on the shore. It was a stingray. It's wingspan had to be at least two feet wide. It's tail was about as long or maybe just a bit longer. An older man, not the fisherman, grabbed the stingray like a bowling ball with his thumbs in its eye sockets to carry it up the beach. The hook was caught in its wing close to the edge. I was very surprised the hook didn't tear out. That tissue had to be really tough. The fisherman couldn't even pull his hook out. He had to cut it out, notching the wing leaving a hook-like tear in its edge.

"Flip it over", the fisherman yelled over the roar of the surf, "it's easier to deal with it that way". So the old guy flipped it over after a couple of tries, again using the eye sockets for leverage. Once flipped, we could see its gaping mouth open gasping for air. Its chest heaved up and down and I walked around toward the top of its overturned head to see in its wide mouth. There were sharp, pointy teeth in there! We were all fascinated.

"Cut the tail off," the fisherman said. "Step on the top of it to hold it down," the old guy told one of the male bystanders. While his foot held down the fish, the old guy used his pocket knife to cut the tail off a couple of inches from the fish's body. "Why are you cutting his tail off," I asked. "To get rid of the stinger,"the old man said. He picked up the detached tail to put his knife blade into the socket where the stinger met the tail. The stinger was farther up the tail and located under it, close to the body. We all expected the tip to be the stinger. It was not like that at all.The stinger was hard and very pointy. The old man tossed the cut-off tail with stinger into the surf. Karan took note that it would probably wash back to shore or lay on the bottom where some unsuspecting swimmer could step on it. She wondered if someone did step on that stinger, if it would poison them as well as hurt them.

"What will you do with it (the fish)," I asked, "Will you eat it?" A young man standing with the group with a Spanish-sounding accent said, "Yes". He was not the fisherman. "What do you eat?" I asked again. "The wings," he said. "How do you cook it?" I asked again. I was fascinated now. He ran his fingers along the contour of the stingray's body to indicate the wings would be cut off along this line. "You don't eat the body?" I continued. "No," he said. "The wings have a lot of meat and no bone." "Is the texture like swordfish or tough?" I continued. "No, it's different." "Does it have its own flavor?" I asked again. "No," he obliged. 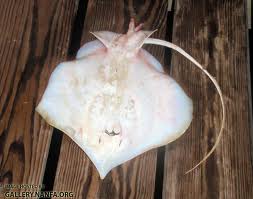 "Well, congratulations," I said both to him and the fisherman, "I'm glad you're going to eat it." My heart melted in that moment as I watched the struggling fish trying to breath with is bleeding cut off tail. It must have been in pain and not killing it outright, but letting it suffer in this manner seemed cruel to me. I appreciate killing for food. I do not like killing just for sport. But, I also respect life enough to not let the creature suffer. These men didn't care about that part at all. In my mind's eye, I put my finger tips between the stingray's eyes on its "third eye" and blessed it. I thanked it for it's sacrifice and it's life. I asked it to provide a tasty meal for this young man, and then I had to walk away. I thought I would cry, but I didn't. It's food, I thought again.

Witnessing this catch was very exciting. I learned lots of knew things about catching, eating and cooking stingray. A woman and her friend walking by expressed her revulsion at eating such a thing. She would never even consider it. "Where's your sense of adventure," I posed to her. She just laughed me off and kept walking. Once again, I missed the opportunity to capture this event on digital film. I have not once remembered to bring my camera on our walks. But I am still praying for the life of that stingray, hoping God will kill it quickly and not let it suffer too much

As we walked back by to finish our walk, we saw the young man had not taken the fish away. I didn't see him anywhere. The old man left it on the wet sand and had pulled his cart over it. Was he hiding it or protecting it from dogs being walked on the beach. I heard the fisherman tell him the law was to catch and release it right away. The stingray was the same color as the wet sand, so I imagined if the beach police rode by, they would not see anything obvious. We also noticed that they were present while the fisherman was reeling in his catch, but left the scene before seeing what he had caught. Maybe they don't monitor licenses or catches on beaches that survive through tourism. I really don't know. It just upsets me that those men had no respect for that poor fish and let it die slowly instead of finishing the job on the spot. When we walked back by, the stingray was not moving. Again, I had to tell myself, "It's food," and try to let it go.
Posted by Kathy Crowley-Gardner at 7:04 AM 2 comments: