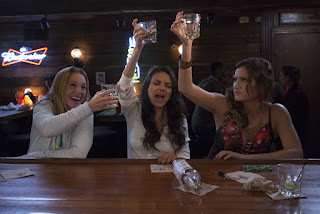 I saw the movie, Bad Moms, last night. It was just hilarious! My sister-in-law thought it was just "ok". When I heard that, I thought, "Hmm," now I can't wait to see what she didn't like about it. Throughout the movie, I kept saying to my friend, "Oh she wouldn't have liked this," and, "she wouldn't have liked that!" I guess unless you've been a Bad Mom, there's no way you could relate to this movie, or even catch the humor in some of its references like when Amy, played by Mila Kunis, is laying on the couch feeling sorry for her self because her whole family left her and she felt like such a Bad Mom. Her two friends come in to get her ass off that couch, and Carla, played by Kathryn Hahn, says, "Get your tits up off that couch, turn off "Twelve Years a Slave", and get to that auditorium!" I am paraphrasing here, but that movie reference was priceless! What mother hasn't felt like a slave to their family's needs at some point? Especially, if that mother is trying her best to be the best mother she can be, which essentially means a "Super Woman".

The movie is wild, honest, crass, and full of humor. We belly-laughed many times before the credits rolled. By the way, wait for the credits, because one of the best parts comes during them. I was a Bad Mom. Being a Bad Mom really means trying to do it all, and never being very successful at all of it. That was me. I tried my hardest to be a good mom, but sometimes my failures still haunt me. I know what they were, and now I just force myself to get my tits up off the couch and move on!

As a side note, Christina Applegate and Jada Pinkett Smith played characters I've never seen them do before. It was interesting to watch.
Posted by Kathy Crowley-Gardner at 8:59 AM 1 comment: