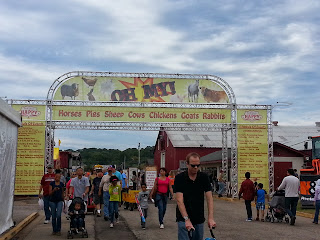 After being sick with a cold all week and watching the SC State Fair coverage on local news, we decided to spend Saturday there. The Temptations were going to be in concert at 7:00pm, but we went too early, and I couldn't wait that late to see them. We were done at 5. I have never been to a State Fair, and Larry couldn't believe it has been over fifty years since he attended one. The theme song from Roger and Hammerstein's 1962 movie, State Fair, starring Pat Boone, my childhood idol, plays in my head every time I think about the fair. I was excited. 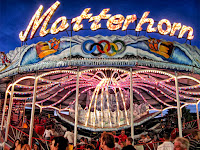 We arrived and all we could see were food stands. We decided to get a chicken in a pita sandwich before meandering around the grounds to get the lay of the land. We wandered first through the kiddie rides then onto the horror houses and houses of glass and many other kinds onto the rides that make you puke. There were three different kinds of Ferris wheels and we went on one as it started to sprinkle. Rain clouds hung overhead, threatening us most of the afternoon. We rode in a sky chair to see the grounds from on high, and lastly rode on one of my all-time favorites, The Matterhorn. 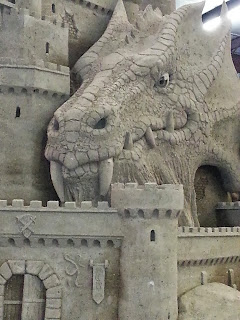 We wandered through all the connected exhibit buildings displaying the multitude of contestant entries vying for a ribbon in baking of everything you can think of, handicrafts and woodworking. Christian politics were there too. "Did you get your word of God yet?" the woman asked as she handed me a pocket-size New Testament. "No, thank you", I replied and moved on sliding the little book in my back jeans pocket. The anti-abortionists were there with their little plastic fetus displays and in another booth, a Christian man was intensely counseling someone. There were lots of commercial exhibits and demonstrations, but my favorite was the sand sculpture of a dragon surrounding his claimed castle. The detail of this sculpture was incredible.

We stopped on the way to the animals to listen to some "Mountain Music" by Jeff Robbins, who made his own banjos out of dogwood and a fruitcake box of his mother's. He was talented, fun and told great stories. Then we walked by a pretty blond woman who looked like she did standing Yoga poses while her little white poodle jumped over her bent legs on command. 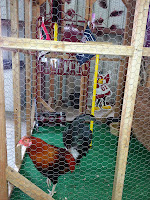 We finally made it to the animal area and walked through the poultry house first. Every kind of duck, rooster, chicken and goose was on display. There were some very pretty and handsome specimens of every shape, size and color; squawking and cocka-doodle-dooing. The smell was very hen-house. A woman stopped to explain to us about the origins of a champion goose we stopped to admire. It was the largest goose I had ever seen. And, of course, in Gamecock Country, there was also a real cock. 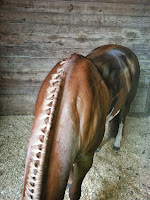 We learned that showing prize goats is much like showing dogs at the Westminster Kennel Club; posing them with the handler placing their legs just so to be judged. We watched young people on horseback compete for ribbons, and just had to go see some beautiful specimens. We ended up in the cattle house and watched young people compete their prized cattle for that blue ribbon. The animals were so calm and seemed trained to perform on command 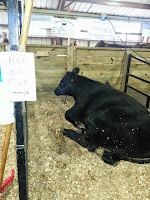 Walking through the stall areas for various farms showing their prized animals was really fun. The smell was not, and accidentally stepping in "paddula", as Larry kept calling the cattle shit I found on my shoe in the car after we left because I kept smelling it after we drove away, was not either. But I admired the animals and the care I saw of cowboys and farmers gently brushing each one to spiffy it up for sale. There were thank you signs to the buyers of their cattle stating the thousands they paid, and one that held a warning to anyone thinking it was okay to walk up to the ass end of a large bull, "Hugo will kick". 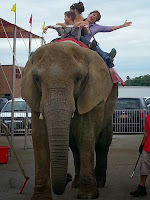 Lastly, I wanted to ride on the back of an elephant. Don't ask me why. I was at the State Fair! It was there, and I could. So I paid my six dollars and climbed on Fazzle's back, a female from India, who began our ride by laying a huge, loud fart which required shovelling, and a huge piss that loudly rained on the asphault before we walked onward. I loved it.

We had a great time at the fair, and were exhausted when we were done. It was time to head to the Liberty Tap and Grille in The Vista where we enjoyed a dark ale from Belgium (8.5%!), and I had shrimp and grits. It was delicious. Lastly, a high school was hosting a formal dance, so we were treated to a fashion show of dozens of young women and men dressed formally in all the bling and sparkle the females could muster and very handsome bow ties with white shirts on the young men. I complimented the table of youngsters closest to us and left them smiling with a, "Have fun!"

Now we're home watching the sixth ALCS game at Fenway park on television, yelling "Go Red Sox" at the TV and posting it on Facebook. I love social media!

Posted by Kathy Crowley-Gardner at 7:28 PM No comments: