Life sure is interesting. I spent this past weekend in Maine with Pat, the wife of my late ex-boyfriend (Bear), who I also consider to be a "Sistah". She wanted to be able to say the cleaning out of Bear's barn was completed. It was a huge job. They own a 40-acre property in rural Maine with this lovely old barn and an old farmhouse built in 1860. She told me Bear had become a hoarder during his multi-year convalescence as a result of a back injury and cancer. He was a carpenter and a smoker all his life. He lived a "live hard; die young" philosophy, and made a lot of people happy along the way.

A couple of weeks ago, twenty-five invited people showed up at the house to do the initial barn clean-out. Pat rented a huge dumpster, and it was filled to over-flowing. I came to help finish that job along with her younger brother. We filled a second equally huge dumpster. I have been feeling badly that she has so much to do, and I guess I needed to be in the place where my good friend actually died. I am one who believes firmly in the value of  "closure", and I guess I needed additional loops closed on this relationship that I wasn't fully aware of. She described the final events of that fateful night, and I sat after she went to bed looking at the last spot where he lay feeling sad. I felt especially sad for his dog, Nita, who whined the entire time we worked in the barn. She missed her Dad, and knows something really big is "up". 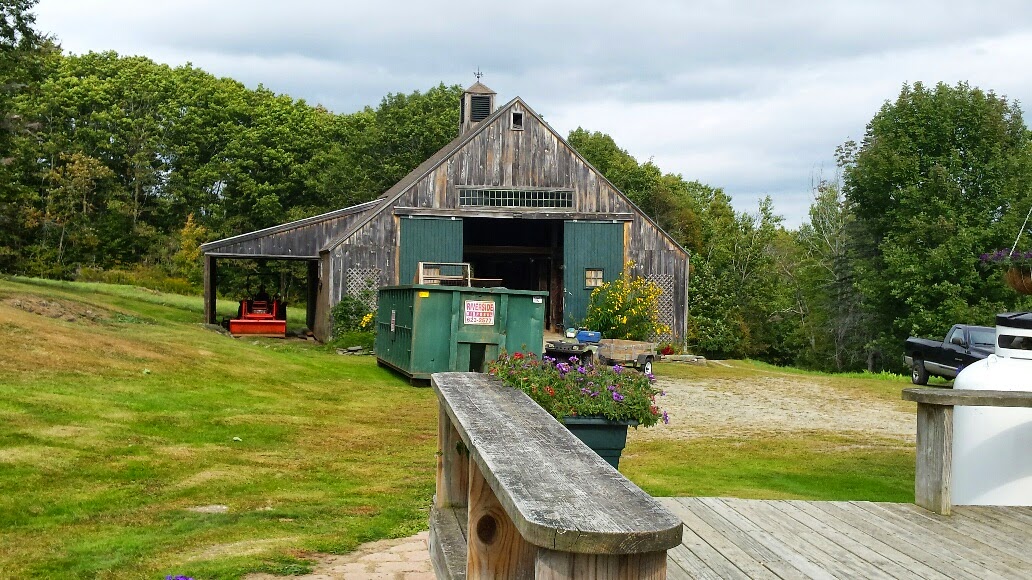 The Universe really does take care of us. A month before my friend died, a couple in their late sixties showed up at the house and reiterated how much they loved the farm. They said that if he and his wife ever decided to sell, they would like to buy it. "No way in hell," was Bear's reply. Pat told me they sent a card to that affect late last year, and she said if she were home, she would have said, "Maybe". She kept the card, and after he died, she called them. They came several times to inspect the farmhouse and barn and told her they would pay cash for the property. They negotiated $9,000 off her asking price, because the old house needed lots of infrastructure work, and the buyers told her no formal inspections would be necessary. They close on the property on October 15th. Pat will be moving out on October 10th. How often do buyers come to you in this life? In this market? Several other neighbors have had their properties on the market for years without a buyer. 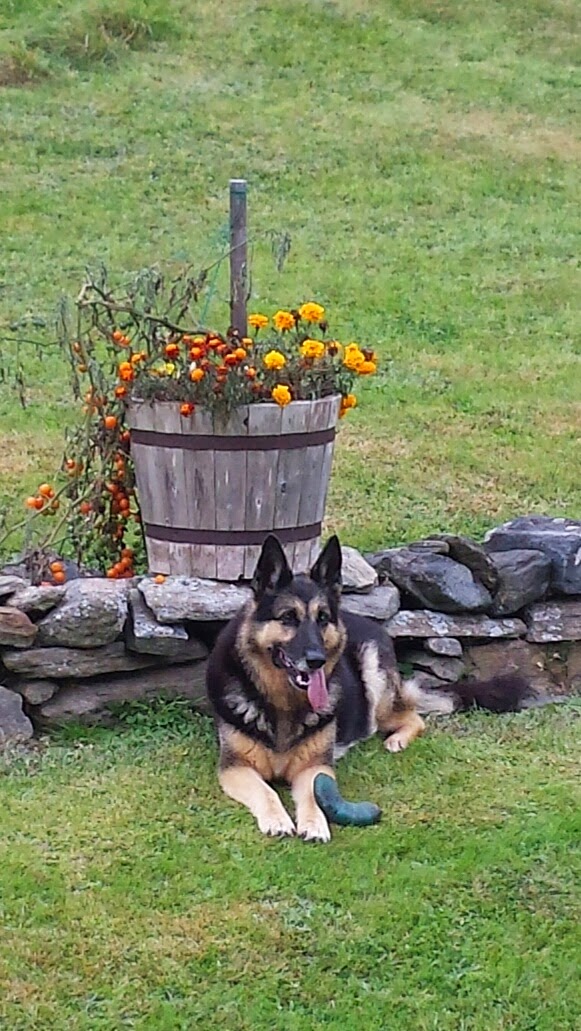 Throwing out volumes of boxes and bins of screws and nails, broken glass or acrylic pieces; papers, old wood, sawdust, rotting hay, old doors and windows; furniture, and a myriad of other junk is very tiring. We finished emptying and swept out six horse-stalls of space, including Bear's wood-working shop, and the hay loft. Did you ever try bagging up old hay? The dust was choking and I regretted not having a mask. By day's end, we were covered in dust and dirt. My legs and hips became increasingly stiff as the day wore on. I can't tell you how many trips I walked in and out of that barn to the dumpster carrying stuff; up and down wooden stairs to the loft, and back to the house. I did take a water and snack break, and I sat on the riding mower's very comfortable seat in between just to get off my feet for a few minutes and drink more water. But, by the end of the afternoon, after Pat said those golden words, "The barn is done," I was sore, exhausted and filthy.

Bear's older brother came to take what he wanted of his brother's stuff. I met his new wife, who was very friendly and nice: so unlike his first wife. They declared they had been sober for two decades, and very happy. He told me he was brought back to life three times during a heart operation, and realized he was given a second chance. With that chance, he was going to be happy and live a happy life. From his face, I could see he was doing a good job with that goal. He and his wife helped us sweep out the workshop a bit, but left because of another commitment. It was so good to see him again. I hadn't seen him in thirty years, and the minute I heard that North Haven Island accent, I smiled broadly.

Bear's son also showed up, and proved himself to be the asshole he always was. He is a very angry thirty-something man; full of bitterness, resentment and bile. His body language and face showed every bit of his hostility, and we made sure Pat was not alone with him for long. He has been treating her horribly through this time, and she has just had it with him and his abusive, rudeness. He never liked me anyway, so he just ignored my presence in the workshop as he said goodbye to his uncle and the wife. I just laughed it all off. Nobody wants to console him for his father's loss because he is acting like such a jerk to everyone. It is very sad.

At the end of our project, the new (not quite yet) buyers showed up and started moving stuff into two cleaned-out stalls of the barn. They watched as Pat took up one more of her husband's tasks: she hopped on the four-wheeler, and led their nine-year-old German Shepard, Nita, on her daily run. Pat looked so cute riding that machine fast all over the huge yard with Nita running full tilt behind her.  The woman buyer shreaked with joy, "She looks like a kid!" The man tried to get on it earlier to take it for a ride, but didn't know the break was on. Pat ran over to release it when she smelled the break burning up. "This is my first time on one," he said. His daughter was on hand to say, "He's living his second childhood." The four-wheeler is the only piece of equipment he wanted to buy from her, plus the log splitter. She still has to sell and $24,000 tractor with bush-hog, and riding mowers. Nita's Run

Once we were officially done for the day, we sat on the deck and contemplated dinner. She wanted to haul boxes to Goodwill and eat dinner out. I was open to that, but my legs said, "Stay put." When her girlfriend called, I said, "Ask her to bring food. Then we won't have to go out." All I wanted to do was take a shower and rest. Soon, we heard the car pull up and Nita barked. When Pat looked out the kitchen window, she said, "Oh my God!" I said, "What!" Many people piled out of a small car with six beautiful large balloons and bags of goodies. Because they knew I'd be at the house helping, they planned an early fiftieth birthday party for Pat, who they could never surprise with anything. Bear told them he had wanted to throw her a surprise party in August (her birthday is late September), and shortly before dying, asked if they would take care of that. This was that party, honed down to bare minimum. This type of party is the only kind Pat could handle right now, and it was perfect.

I got to meet her good friends of thirty-plus years of whom I've heard the stories and background of their relationships. I also got to meet the next-door neighbors who have been so helpful to both Pat and Bear through this very difficult time. We were a party of seven in all, and it was great fun! I felt like meeting these people was another loop to close. They had heard of me, everybody had, and I got to tell the story of me and Bear. Whenever Pat and I talk about each other, nobody can believe we could be friends. We love each other and are proud of our friendship. We talk openly about our respective relationships with the same man, and make ourselves and everyone else laugh.

I felt like I closed the loop with Bear's family too. Seeing his brother and son one more time was great. I also met Pat in Massachusetts at Bear's daughter's house. I haven't seen her in fifteen years, and she graciously allowed me to come. I brought her new baby a little gift and met her husband. They have a lovely, large home in Medfield, and I told her my family lives all around her in surrounding towns. It was really nice. She and I have always gotten along, and she was very sweet to allow me to include myself.

Closure is important. I suggested to Pat, that when everything is out of the house and she is ready to walk away and reluctantly begin a new phase of her life, that she walk through every room, or building or garden or wherever she needs to remember her life there with Bear. I suggested she go to each spot, remember the memories created in that place, thank it for holding those memories, for sheltering them during the past nine years of their life there, and bless it all. Once she does this, I said, "Then walk away." I told her I've done this ceremony with every house and apartment I've ever lived in and it really helped me. She thanked me for that suggestion, and said she and Nita will do it together before the closing.
Posted by Kathy Crowley-Gardner at 10:15 AM No comments: